BEACON is a joint powers authority consisting of the Cities of Port Hueneme, Oxnard, Ventura, Carpinteria, and Santa Barbara, and the Counties of Ventura and Santa Barbara. The agency was established to seek solutions to replenish their eroding shorelines. BEACON’s state sponsored demonstration project plan consisted of dredging over 250,000 cubic yards of sand from an offshore borrow site to test the most economic means to nourish beaches in Santa Barbara and Ventura Counties. NCI performed a comprehensive geophysical and vibracore sampling field effort to locate the best source of beach quality sand. Responsibilities also included CEQA documentation, obtaining permits from regulatory agencies, and construction management of the dredging operations and beach nourishment work.

The project was funded by the California Coastal Conservancy. NCI negotiated a sole source dredging contract on behalf of BEACON to perform all work using cutter suction hydraulic dredge equipment. During the regulatory review phase the project description was modified to utilize alternative borrow source material. Beach quality sand trapped by Santa Barbara Harbor navigation improvements was selected as the approved borrow source. A hopper dredge operation was then designed to dredge and transport the sand from Santa Barbara to Goleta. The sand was pumped directly onshore using an offshore mooring buoy where it was final graded to specification using conventional earth moving equipment. The project was the first project of its kind in Santa Barbara County that involved beneficial reuse of harbor trapped sediment for beach replenishment.

During the spring and summer of 2001, 2.1 million cubic yards of sand size sediments were dredged from six identified offshore borrow sites for nourishment of twelve selected receiver beach sites between Oceanside and Imperial Beach within San Diego County. This project, known as the San Diego Beach Sand Project, was the first regional beach restoration project undertaken on the West Coast of the United States. It was eight years in the planning, funding, engineering, permit processing and final design phases prior to the initiation of construction in early April 2001, with its completion in late September 2001. The Shoreline Preservation Committee of the San Diego Association of Governments (SANDAG), a joint powers organization, oversaw the planning and administration of this successful project that received funding from federal, state, and local government sources. Dredging and filling was performed by a trailing suction hopper dredge which utilized six ocean borrow sites and traveled to the individual twelve receiver beaches stretching between Oceanside and Imperial Beach. At the receiver beach, the dredge attached to a moored floating section of plastic/rubber pipeline that was attached to a submerged steel pipeline extending from approximately the -25 ft. MLLW depth contour to the shoreline. The six offshore borrow sites were dispersed from near the Mexico border to the north San Diego County line, and were located roughly one mile offshore in 45 to 90 feet of water depth.

NCI prepared all the final design and preparation of construction plans, specifications and contract documents for the dredging of sands from the six offshore borrow sites and the pumping of this sand to the twelve receiver beach sites. The project’s design and contract documents allowed for the 2,100,000 cubic yards of dredging to be performed by using either cutter suction dredge and/or hopper dredge equipment. NCI’s work also included overseeing construction bidding, award of contract, full-time construction management and inspection, and all hydrographic, aerial, and land side surveying for design and for construction. NCI also performed additionally required offshore marine geophysical survey work and offshore vibracoring/sediment analysis work at the offshore borrow sites. 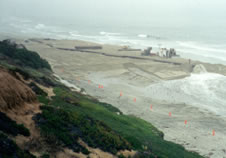 Based upon an intensive investigation of the coastal processes along a sand spit and inlet at Omaha Beach, NCI participated in the design of a series of groins, a seawall and a program of beach nourishment to reestablish shoreline equilibrium as a means of shore protection, stabilization of a navigational channel and protection of waterfront homes. Services included the preparation of engineering drawings, specifications and cost estimates, in addition to construction review and a follow-up beach monitoring program.