As part of the Dana Headlands development, a walkway and associated retaining wall was built atop the shore protective revetment to promote public use and enhance the aesthetic scenic view. To construct the walkway, following installation of the center footing and stem wall, forms were set on the graded surface along each edge of the walkway. The walkway was cast against grade and temporary support from the riprap along the beach side of the structure. The cantilevered slab concept did increase thickness and reinforcement in the section; however, those additional costs were made up in reduced labor and materials costs eliminating the down-slope supports for the structure.

Beach access, through the riprap revetment, is provided by an ADA compliant stairway and an emergency-vehicle access ramp. The stairway is oriented diagonal to the alongshore alignment to minimize wave uprush, with the stairs accommodating a sand elevation range of over 10-feet. The cast-in-place concrete structure is founded on spread footings keyed into bedrock at the base and bearing on competent soil near the top.

To thoroughly understand behavior of the structure under loading and settlement scenarios, a finite element model was used in the structural analysis. Stress levels in the structure, when subjected to lateral earth or seismic forces depend largely on the soil characteristics that support it. By modeling the soil as springs in the finite element analysis, and altering spring constants to cover a safe range of soil characteristics, stress envelopes reflecting the worst-case scenario for all loading and soil combinations were clearly defined. Using this approach produced a design that reliably meets its service requirements. 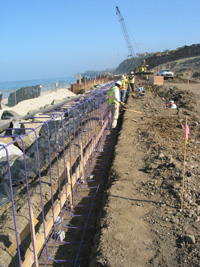