The San Francisco Marina consists of two harbors (West Harbor and East Harbor) which are physically separated by about one-half mile. NCI utilized two hydraulic models to assess shoaling and wave conditions at the harbors’ entrances. The two models consisted of the Corps of Engineers’ San Francisco Bay tidal hydraulic model in Sausalito and the University of California’s ripple tank model in Berkeley. The purpose of these model studies was to review the existing wave conditions at the harbors’ entrances by analyzing wave patterns in the ripple tank model; and to identify the shoaling pattern near the West Harbor entrance by observing site water currents in the tidal hydraulic model.

Alternative protection improvements consisting of shoreline spur groins and breakwater extensions were tested in the ripple tank model to assess their impacts on harbor protection. Based on the model test results, mitigation measures were recommended to minimize shoaling impact at the West Harbor entrance and to reduce wave conditions at both harbor entrances. 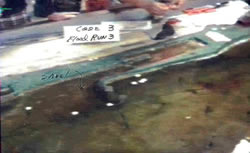