During the midst of the 1983 storm waves, NCI provided emergency engineering design, plans and full-time construction inspection for the placement of over 35,000 tons of rock riprap along 7,500 lineal feet of shoreline for the protection of 125 property owners and residences. Close cooperation between NCI, the client and the contractor prevented the loss of any residence. This structure was constructed to a 2.5:1 (horizontal: vertical) slope with a toe elevation of approximately +7 feet MLLW (Mean Lower Low Water) and a crest elevation of +17.5 feet MLLW. Prior to 1983, an emergency revetment structure was constructed during the winter season of 1978 along the western portion of the existing structure and in 1980 along the eastern portion. This emergency structure on the eastern portion consisted of first installing sand-filled geotextile Longard tubes and then placing stone directly behind the Longard tubes.

Since the emergency placement of this revetment in 1983, NCI has provided ongoing beach monitoring surveys and inspection of the revetment to assess beach impacts, as well as services for final regulatory permit acceptance. Additionally, during 1998, NCI performed a detailed inspection/evaluation of the entire seawall structure, and based on this evaluation, recommended the placement of 5,500 tons of new stone on a lot-by-lot basis for stone that had settled/dislodged during the previous 15 years. NCI then prepared the construction contract documents, secured regulatory agency approvals, performed contractor bidding and award/negotiation of contract, and provided full time resident inspection and construction management during placement of this additional stone. Also, in 2004 and 2006 NCI again provided the same services for the placement of 3,000 tons of new stone during 2004 and the placement of 700 tons of new stone repair work during 2006. Since 1985, NCI has continued to provide either annual or bi-annual inspections/evaluations and to recommend additional repair work as necessary. 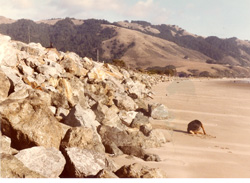